The European powerhouses come into the tournament as one of the favourites, as they have a hugely deep squad, with the likes of Kai Havertz, Manuel Neuer, and Jamal Musiala all likely to get out on the pitch under Hansi Flick. Japan, meanwhile, have the likes of Arsenal’s Takehiro Tomiyasu, Schalke’s Maya Yoshida, and ex-Liverpool ace Takumi Minamino within their squad. Germany will be hoping to kick off their tournament with a win, especially as they were knocked out of the 2018 World Cup in the group stages, having been beaten by Mexico and South Korea. Japan, by comparison, reached the Round of 16, having qualified from a group featuring Colombia, Senegal, and Poland; they were beaten by Belgium in the first knockout round.

With plenty of intrigue in the game, you’re not going to want to miss it. Here’s all the information on how to watch the game. Germany handed a surprise call-up to Borussia Dortmund’s 17-year-old forward Youssoufa Moukoko for their 26-man World Cup squad, while Southampton defender Armel Bella-Kotchap was also included.Germany head coach Hansi Flick announced his 26-man squad for the tournament in Qatar, with the  teenager Moukoko, who has scored six times in the Bundesliga this season, selected following the absence of the injured Timo Werner. Werder Bremen forward Niclas Fullkrug also earned a spot after a stellar season with 10 goals so far. Saints centre-back Bella-Kotchap is one of four Premier League players included in the squad along with West Ham defender Thilo Kehrer, Manchester City midfielder Ilkay Gundogan and Chelsea forward Kai Havertz.

There is also a sensational return for 30-year-old midfielder Mario Gotze, who is back in the national team after five years out. “Mario Gotze is there. 2017 was the last time. Mario is totally happy and so are we to have him. It gives us many options,” Flick told a news conference. Bayern Munich provide a strong midfield core with Thomas Muller, teenager Jamal Musiala, Leroy Sane, Serge Gnabry, Leon Goretzka and Joshua Kimmich. Goalkeeper Manuel Neuer will lead the team and remains first choice for the fourth consecutive World Cup. Four-time winners Germany are looking to make amends for their shock first-round loss in 2018 with the team leaving for Oman on Monday, where they will play their final warm-up game on November 16 before flying on to Doha. Dortmund captain Marco Reus and defender Mats Hummels, however, missed out, with the former failing to recover from yet another injury in time.

Reus also missed the 2014 World Cup after suffering an injury on the eve of their departure for Brazil where they won the title. “He tried everything to catch this train. It hurts us because we could have used his quality,” Flick said. Hajime Moriyasu’s side have been placed in Group E with 2014 winners Germany, 2014 quarter-finalists Costa Rica and 2010 champions Spain. Japan can take heart from the fact that the team tends to exceed expectations. At the 2018 World Cup, it advanced to the round-of-16, despite being placed in a group which contained Poland, Senegal and Colombia. A poor showing in the 2014 World Cup was preceded by an impressive 2010 tournament in South Africa, during which they advanced from the group stages before being beaten by Paraguay on penalties. At that tournament, Japan recorded wins over Denmark and Cameroon in between a 1-0 loss to eventual runners-up Netherlands.

“It’s not going to be an easy path [out of the group],” Japan Times sports writer Dan Orlowitz told Al Jazeera. “Everyone agrees that a win against Costa Rica and then at least a draw with either Germany or Spain is the most realistic way forward. Those results won’t come easy but they’re not impossible if the team plays at its best.” Japan currently have several players playing in Europe. The squad, which, on paper, is as good as it has ever been when it comes to technical qualities. But they have lacked leadership and calmness on the field without the presence of former players Keisuke Honda and Shinji Kagawa in attack. Moriyasu’s side did follow up strongly with convincing wins over South Korea and the United States but they will have to be more clinical in the World Cup if they want to advance to the knockout phase.

For Orlowitz, players such as Junya Ito, Kaoru Mitoma and Daichi Kamada will have to step up. “What Honda and Kagawa brought to the team is star power which is missing these days. It is one of the few complicated and intertwined reasons behind the team’s recent drop in popularity. Takefusa Kubo and Takumi Minamino are the faces of the team in that sense but if we are being honest, they’ve yet to really perform when it matters,” said Orlowitz. An attacking midfielder by trade, Kamada is the engine of the Japanese team and will arguably be their most important player in the World Cup. He also brings a winning mentality to the squad, having helped Eintracht Frankfurt win the Europa League in May this year.

Yoichi Tominaga, a Kagoshima resident, who has been a fan of Japanese football for almost 30 years, is not too confident about his country’s chances, though. Tominaga believes that Moriyasu’s tactical decisions are flawed and that this could cost the team. “I don’t think the team is heading in the right direction under Moriyasu,” Tominga told Al Jazeera. “Players trust him as he is a good person but he is not a good tactician. If the players could have a tactically minded coach, they could be playing much better than they are now. As an underdog team, we could have a chance to beat great teams like Germany and Spain but we need to be organised. We will never forget the 2018 World Cup where we led Belgium 2-0 before losing 3-2.” This World Cup Group E tie will get underway at 1pm UK time on Wednesday, November 23.

The 2018 World Cup was the first time since 1998 that Germany did not reach at least the semifinal. They had been on the podium for four straight World Cups. It was also the second time ever that Germany did not at least reach the quarterfinals. Japan qualified for their first World Cup in 1998 and have not failed to qualify since then. Unfortunately for them, they have never surpassed the Round of 16 and have only advanced out of the group stage three times. Japan possesses the talent to put up a fight and possibly pull off the upset in the opening match of this group. On the other hand, Germany’s recent form in international play is shaky at best, as they finished third in their group in the Nation’s League and lost in the Round of 16 against England during the 2020 Euros. This is, however, the first major tournament for new coach Hansi Flick, who previously served as an assistant under Joachim Löw. 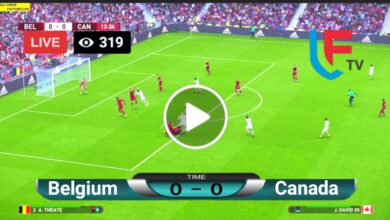